Back to Model Making

Useful information about drones and copters

Anyone who has already controlled a quadrocopter knows how much fun it is. But not everyone knows what was to be considered when using a Copter or a drone.

Multicopter, such as tricopter, quadrotor helicopter, hexacopter and octopopter have been enjoying increasing popularity for years. If the first models were more for electronics or model flight specialists, modern copters or drones are now technically perfect, so that they can be mastered by everyone playfully. Any prior knowledge of model aircraft is no longer required. Unpacking, charging and flying is the current motto.

So that it is really as child's play as described in the advertisement, complex centrifugal systems in the copter provide for an absolutely stable flying behavior. A built-in compass, as well as the reception possibility of navigation satellites also enable modern Copters to perform autonomous flight maneuvers or to find back to the starting point automatically.

In addition, even in the simplest Copters, better and better cameras are installed, which also enable very good aerial photographs to be taken in the lower price class. If the cameras are also mounted on stabilizing gimbals, even amateur filmmakers create brilliant flight videos, which would have been possible years ago only with gigantic budget and most complex technology.

But as beautiful as modern technology is, there are some important points that must be taken into account when using copters or drones.

Without insurance, it's not possible 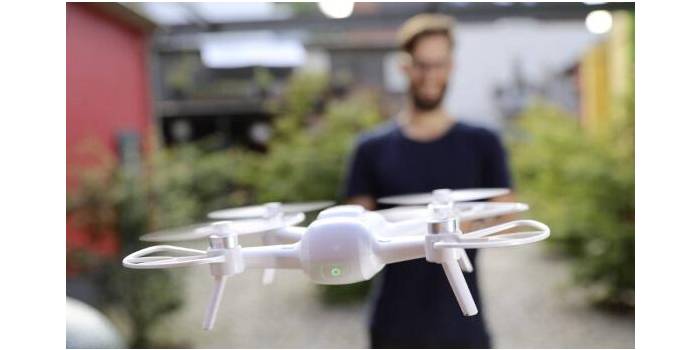 As the private and commercial operation of copters or drones involves a considerable risk potential, these models are subject to compulsory insurance. It does not matter whether it is an inexpensive entry-level model or a high-end copter with 4K camera.

For this reason, you should check with your liability insurance company before the first start to determine to what extent the use of your Copter is covered by the existing insurance. If necessary, a suitable insurance can be taken out via the German Model Flying Association, so that third-party damage caused by the crash of the drone or by possibly uncontrolled flight behavior is reliably covered.

Even if the insurance charges the hobby cash register with a few euros, this sum is not proportional to the actual costs incurred in the event of damage.

Legal requirements for the use of drones

The drone regulation, which came into force on 07.04.2017, regulates the use of multicopters and drones. And these are the main points:

Drones must not be used anywhere. There are areas where the use of drones is prohibited or where a minimum distance of 100 m must be maintained. These include:

Drones and multicopters may only ascend outside of model airports to a maximum flying height of 100 m. The use above the 100 m limit is only permitted with an official exemption from the aviation authority of the respective federal state. On model aircraft flying sites with a general permission to climb model planes in which a flight glider monitors current flight operation, the quadrocopter may also be operated above 100 m altitude.

The take-off weight is the weight of the drone including the battery, camera and all attachments . The legislator has divided the drones into different weight classes and combined them with corresponding requirements, which will enter into force from 1 October 2017:

Take-off weight from 250 g
onwards All copters and drones that have a take-off weight of 250 g or more are subject to the labeling obligation. In this case, a permanent and fire-proof plaque with the name and address of the owner must be placed in a visible place in order to quickly locate the originator in the event of damage.

For the operation of a Copters weighing more than 2 kg on a model aircraft terrain with air-legal permission to ascend and flight glider no knowledge is necessary. If there is no flight glider present, as the drone pilot is alone in the airfield, he must have a knowledge record in order to be allowed to start.

The operation of a drone or a Copter at night is subject to authorization . The required permission must be requested from the national aviation authorities.

In principle, drones and copters must be flown below 5 kg at the operator's sight. Flights with a video goggles are only permitted if the aircraft is not heavier than 250 g and the maximum flying height is 30 m or if a second person monitors the drone within sight and alerts the operator of the transmitter of impending danger. In this case, this is considered to be operating within the operator's sight.

Commercial use of drones

Until now, commercial users of unmanned aerial systems always needed an access permit. No matter how heavy the drone used was. With the new regulation, no permission is required below a total mass of 5 kg. Of course, the altitude limitation of 100 m outside of approved model aircraft flying sites as well as the obligation to provide identification and knowledge is also valid here. 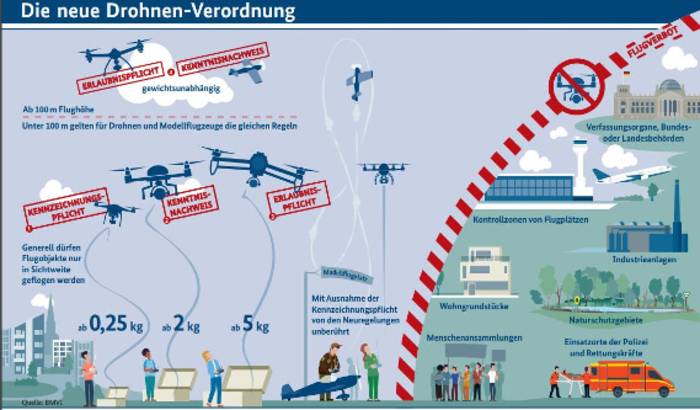 However, this is not the proof of knowledge according§ to 21e of the air traffic regulations, which can be easily acquired online at the German Model Aircraft Association if required. For commercial use, proof of knowledge in accordance§ with 21d of the Air Traffic Regulations is required, which can only be obtained from a body recognized by the LBA.

If the drone used is heavier than 5 kg or is to be flown higher than 100 m or outside the pilot's sight, the relevant national aviation authority may grant an exemption.

Information brochure of the BMVI

This text is machine translated. Useful information about drones and copters Anyone who has already controlled a quadrocopter knows how much fun it is. But not everyone knows what was to be considered when using a Copter or a drone. Dro...