Back to Component Accessories

About fans and blowers

Fans and blowers are among the fans as flow machines. A distinction is made between axial and cross-flow fans. In addition to the fans themselves, our range includes various fan grilles and ballasts. Whether you are an industrial customer or a hobby bastler – we can all find what you are looking for and can put together your individual ventilation system from various components.

You are here in a sub-category for semiconductor components. The offered fans are designed accordingly for electrical requirements.

How do fans and blowers work and what are they used for?

Note: The terms fan and fan are no longer used in technical language. Instead, all current standards speak of fans.

In everyday language, most people think, however, under the term ‚fan‘, primarily of devices for ventilation and ventilation of rooms. You regularly forget the diverse applications of blowers and fans. These are used, for example, as PC fans for active cooling of computers, in the storage and transport area, for example for drying and explosion protection or as auxiliary technology for controlled fires in various technical processes. The applications of fans and blowers cannot be described in a final way because of their omnipresence.

The use of fans and blowers is used to accelerate the exchange of air and therefore to regulate heat. The fan uses a motor to drive the fan wheel, whose bucket-shaped spokes displace the ambient air, thereby confusing and accelerating its air flow. This means that heat and sometimes also exhaust gases are transported away from the place of use of the fan more quickly. By keeping warm air away, the fan takes over a cooling function. In addition to fans with blowers, exhaust systems are sometimes used to transport the exhaust air even faster. In some applications, the supply air is also specially prepared, for example by adding protective gases for explosion protection purposes in a plant.

In pneumatic composite and heat recovery systems, fans and blowers are used to mix warm and cold air as well as various particles in the air and to transport them to the desired location after this diffusion. Application scenarios for complex pneumatic controls are mainly found in industry.

Fans are installed both free-standing and in composite systems, for example, in case covers of sensitive technical components, in masonry of buildings or in shafts with controlled air flow.

What fans and blowers are there?

Note: The fans and blowers in this category are used to cool semiconductor components in electrical engineering. If you are looking for a ventilation system for buildings, PC cooling, a fan heater or a fan, you can find it in the corresponding departments of our online shop.

A look at the technical data makes the selection easier

The power of the drive is decisive for the efficiency of a fan. The corresponding motor speed can be found on the respective sub-pages in the technical data of individual products. In addition to the drive, the shape and alignment of the blades on the fan wheel also play a role in efficiency.

Noise emissions result from the fast rotating parts in fans and blowers. If you are concerned about the quiet operation of your fan, observe the noise emission data in decibels (dB) in the technical data. 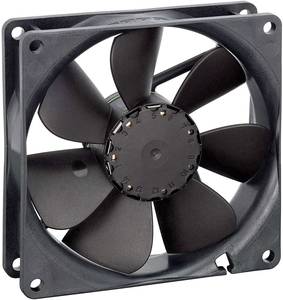 For axial fans, the air flow runs parallel (axial) to the rotation axis. The space-saving design is the most widely used fan type, as the ratio between hohem and small dimensions can be optimized for the fan. However, axial fans are virtually ineffective in increasing the pressure during air flow.

Warning: Sometimes the air flow is specified in liters/min, i.e. liters per minute. For comparisons, you may need a factor of 60 to convert the time periods.

In case of cross-flow fans, the air flow hits the rotor blades of the fan head-on. The drive for the fan wheel is therefore mounted on the side. When purchasing a cross-current fan, pay attention to the position of the motor to facilitate installation at the place of use. 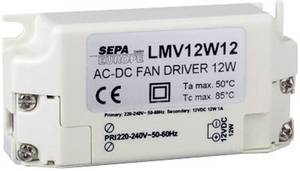 Fan ballasts are, for example, upstream for the rectification of alternating current, as the efficiency of fans with direct current is higher than with alternating voltage. In addition, some ballasts take over safety functions such as switching off in the event of overload and short-circuit. Time controls as well as other start-related special circuits can also be implemented via ballasts.

Fan grids are primarily used as protection against contact, because if someone were to reach into a quickly rotating fan wheel, it could be seriously injured. In addition, the fan guards are often fitted with filters to prevent dust from entering the fan and causing damage to the engine and other electronic components. In addition, these filters protect the area to be ventilated from dust.

In addition, the fan grillees also have fan mounting collars. Most of the time, these are mounting flanges.

The material and dimensions are important criteria for the selection of fan grillees, filter inlays and fixing sleeves. The material should be stable, sufficiently insulating or corrosion-resistant in humid environments to suit the application. The dimensions of the fan grillees are relevant for the fitting.

This text is machine translated. About fans and blowers Fans and blowers are among the fans as flow machines. A distinction is made between axial and cross-flow fans. In addition to the fans themselves, our range includes various fan grilles a...