Back to Cars, Hobbies & Household

From telegraphy to voice radio

When it was beginning of the 20th century. In the 19th century, radio waves with voice (or music) were modulated, the radio was created. Suddenly it was possible to talk to someone who had similar equipment somewhere in the world, just like on the normal telephone. The preferred frequency band was and still is the shortwave. It is reflected through the ionosphere and can circle the earth in a zigzag-shaped manner.
The use of short-wave frequencies requires expertise, which must first be acquired and finally confirmed by a license. Prerequisite: The use is not commercial, hence the term "amateur radio".

The classic radio devices are stationary amateur radio devices with microphone and antenna on the roof. In addition to the original amplitude modulated bands (AM = long, short and medium wave), they often offer frequency modulated bands (FM = FM/VHF/UHF), often with more than 30 channels per band. If you want sparks with the greatest possible power, make sure that an SSB mode is available. SSB stands for single-sideband modulation (single-page band modulation), which means that the entire transmission energy is used exclusively for the information content of the signal – that is, the language. The bandwidth requirement in short-wave radio is halved compared to ON , the radiation output doubles. This increases the range by a multiple.

Small handheld devices are very popular for mobile communication. The external antenna is not required here, as it is permanently installed. In terms of the areas of application, walkie-talkies are comparable to stationary ones. However, they do not reach their transmitting power by far, but often only a tenth of it. In addition to devices for amateur radio, there are special versions for maritime radio. The following applies to all: Operation is only permitted with the corresponding license. 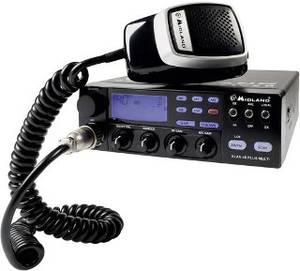 The dependence on an amateur radio license and the associated training eventually led to CB radio. CB stands for "Citizen Band", a license-free frequency range (around 27 MHz) for citizens, in Germany referred to as "All-man Radio". CB radios were widely used until the 1990er, but in recent years they have been increasingly squeezed by mobile phones and smartphones. However, CB radio has survived in some areas, for example truck drivers, who are warning themselves against traffic jams on motorways.

The biggest disadvantage of the CB radio, which is an advantage at the same time, especially nowadays: It can be used by anyone at any time. Since the frequency band is very narrow, it used to be difficult to establish a connection only for himself and his interlocutor. Today, this is no problem thanks to the improved technology of the CB radio sets, but the range is quite limited. Depending on the location and the type and size of the radio antenna, a CB radio device cannot bridge more than 10 to 100 kilometers.

As with amateur radio equipment, stationary or in-car devices and hand-held devices are available. CB radios are similar to those from the rights-managed segment: AM is available as well as FM and SSB. However, due to the limitation to the 27 MHz frequency range, the transmission power is considerably lower and rarely exceeds 12 watts. By comparison, amateur radios often bring more than 60 watts to the antenna in SSB mode.
Pure CB walkie-talkies sparks are usually only available in AM and FM channels with power ratings in the single-digit watt range, but they are handy, mobile and easy to use. 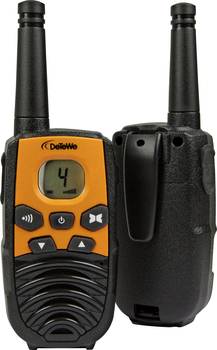 While CB radios in their 27 MHz frequency range communicate exclusively in analogueue mode, digital signals can also be transmitted in the license-free Freenet. This was made possible by the release of the former mobile radio B network, in which six channels are now available in the low-fault range of 149 MHz. The range is up to five kilometers depending on the terrain. The most important difference to amateur and CB radio: Only handheld devices are permitted, the power is limited to 500 mW and – very important! – Use is only permitted in Germany.

Since only portable radios with limited power are permitted for Freenet use, the selection criteria are limited to robustness and user comfort. Freenet devices are usually much smaller than their amateur radio and CB counterparts, they are usually weatherproof and are often offered in a set with a charging station.

As an alternative to Freenet, you can use devices for the PMR/LPD or DECT frequency range. The PMR/LPD walkie-talkies look similar to Freenet models, but they are even smaller and have an even shorter antenna, as they have a range of 433 or 446 MHz sparks. Originally, PMR devices were only approved for company radio and against payment of fees, but until 31 December 2022 they may be used freely for analogueue voice transmission. This is due, among other things, to the fact that some devices have a maximum transmission power of 10 mW and only FM (technically referred to as LPD). The range is correspondingly low. Pure PMR devices without LPD restrictions can be used on distances of up to 10 kilometers. 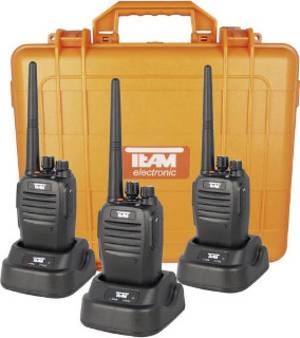 DECT radio is used in wireless telephones. This transmission method works purely digitally in the 2.4 GHz band, but has a range of up to 50 meters in buildings and 300 meters in the open only – due to the maximum permitted power of 250 mW. DECT headsets are popular, i.e. headphones with microphone brackets. They allow hands-free wireless communication. In our online shop you will find Freenet, LPD and DECT radios, all components for the PMR radio as well as walkie-talkie batteries.

A further area of application for DECT radio devices are so-called tour guide systems. They consist of small, splash-proof units, which can be carried with a clip or strap. Commercially available headphones can be connected to this. Such systems can be seen, for example, during city tours, museum tours or factory tours.

A conversation between the motorcyclist and his passenger or another biker is almost impossible while driving. An ideal application area for radio sets. There are three different versions of motorcycle radio equipment: As an intercom system with operating elements to be attached to the respective helmet, as a supplement for PMR walkie-talkies and as a modified hands-free system with coupling to the smartphone and remote control via the steering wheel. In all cases, a headset made of flat speakers to be attached to the helmet and a microphone are standard equipment.
If there is no connection to a radio or smartphone, most motorcycle intercom systems work with Bluetooth, i.e. short-range radio.

In addition to radio devices that can transmit and receive, there are pure receivers, which have little to do with typical radios. These radio scanners are designed for the reception of radio services and sometimes offer an enormous frequency spectrum. With very good devices, scanning from 50 kHz (long wave) to 1300 MHz (UHF) is possible, for example, to detect time-signal transmitters as well as microwave ovens, WLAN, Bluetooth transmitters and "bugs".