What is an Apple Watch 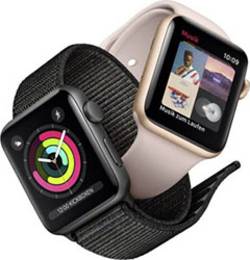 The Apple Watch Series 3 is the latest generation of smartwatches from manufacturer Apple. Like other smart watches, Apple Watch 3 offers a range of features that complement – and sometimes even replace – your smartphone. These devices are designed to make the use of mobile apps even more comfortable. A short wrist vibration alerts you to the receipt of a new message, but appointment reminders are not accidentally overlooked because the smartphone is buried in the pocket. If you want to access Apple Music while playing sports, but also monitor your own pulse rate, you can wear the corresponding sensor directly on your wrist thanks to Apple Watch. The older generations of the Apple Watch series have already been equipped with many features and technologies. The Apple Watch Series 3 is a step further. With watchOS 4, the series offers a new operating system, which is considered the ultimate sports watch thanks to the training app and intelligent activity tracker. The cellular equipment also makes it possible to use the Apple Watch Series 3 without a smartphone.

How the Apple Watch 3 communicates

Smartwatches such as the Apple Watch Series 3 communicate with a connected mobile device via a Bluetooth or WLAN connection. Within a few meters, the device always prefers the Bluetooth connection. If the connected device is not accessible via Bluetooth, the WLAN is used. Apple Watch 3 "GPS" continues to do so. The Apple Watch 3 "GPS + Cellular", on the other hand, also has an eSIM card and is therefore not dependant on Bluetooth or WLAN. ESIM is the abbreviation for "embedded SIM" and means that the SIM card is already installed in the model. The clou: The device has an LTE function, it does not need to be connected to a smartphone via Bluetooth or WLAN. You can actually make calls on your wrist using the LTE version or stream music while jogging without having to carry your smartphone with you.

For the GPS + Cellular version of Apple Watch Series 3, the eSIM is enabled by the mobile service provider. Not every wireless service provider has the right contracts on offer. The provider that can use eSIM is listed on Apple's website.

Apple's Watch 3 comes with the watchOS 4 operating system, and offers even more interesting features and applications than previous models, especially for fitness enthusiasts. In addition, the housing is waterproof in flat water and thus ideal for swimmers who do not want to miss out on the control of their pulse frequency or simply want to be always reachable.

Sometimes there are connection drops between your smartphone and Apple Watch. Typically, restarting both devices with Wi-Fi and Bluetooth enabled will resolve the issue quickly. If partout does not want to establish a connection, the last measure is to uncouple the clock and smartphone. To do this, from the Apple Watch, select Settings > General > Reset > All Content and Settings. Then open the Watch app on iPhone, select Apple Watch from My Watch, and tap the "i" behind it. Then go to Unpair Apple Watch and simply pair the devices again. 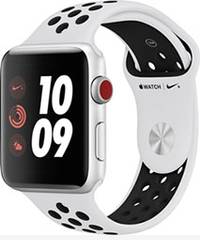 Can the Apple Watch 3 GPS + Cellular be used without an iPhone?

Since Apple Watch 3 can connect to the network itself with eSIM, it is assumed that it can be operated completely without iPhone. However, the device is designed in such a way that it is used in combination with an iPhone and only then unfolds its full functionality. LTE operation is only a convenient addition.