Back to Cable Protection 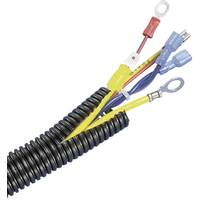 How is a corrugated pipe structured?

Corrugated pipes are made of different materials depending on the application. For example, polypropylene (PP), polyamide, polyurethane, various metals such as steel or brass, as well as special synthetic materials such as TPE, a special rubber mixture that is odor-neutral, are used. Plastics are mainly used. The main area of application in electrical engineering is the protection of cable strands and electrical installations. Some of them are also found in mechanical engineering, which are mostly made of metal.

Together, the materials have a flat shape that is hard and inflexible. If a pipe that is not corrugated were to be built from this one, it would hardly be flexible. The flexibility is produced by a periodic curl of the material. The curl is shown in a small periodic change in the diameter.

Thus, it is effectively not a lot of small grooves, but a long one that runs around the tube many times. This curl makes it possible to bend the tube without having to forego the robustness of a hard plastic.

What was the advantage of corrugated pipes?

Corrugated pipes offer different advantages depending on the application area, which considerably increase the functionality and flexibility. When installing an electrical installation, the use of corrugated pipes, through which the individual cables are laid, is worthwhile for several reasons. Thus, the cables can be laid fixed, at the same time they are easy to replace and repair. If cables are installed in a building, for example, they are simply laid inside the empty pipe through walls and screed.

This protects the cables and ensures that they are not concreted in and are difficult to reach. If there is a problem in the internal power supply, this makes it easy to maintain. The individual cables can be removed from the protective hose and replaced if necessary.

In addition, you protect against animal damage not only in buildings but also outdoors. Because of the hard material rodents cannot bite through the cables. Other animals or people cannot simply damage them.

Corrugated pipes also protect against environmental influences. Both water and other influences will bounce off the outer shell and will not damage the insulation of the cables.

In addition, most protective hoses are resistant to acids and fire, so that the cable in the corrugated hose is protected against any possible damage.

The corrugated pipes themselves offer the best robustness and high corrosion resistance due to the hard plastic and rarely need maintenance or replacement. They are also cheap to buy due to the low-cost material.

What was to be considered when purchasing?

If you would like to buy a corrugated tube to protect your wiring harnesses, it is worth looking at some key data. With this you will find the perfect protective hose for your application. The data can always be found on Conrad's product page.

Depending on the number and thickness of the cables you want to pass through the corrugated pipe, the diameter of the pipe plays an important role. The producers indicate both the outside and the inside diameter. The more important value is the inner diameter. This indicates how much space the protective hose offers inside. If you want to lay more than one cable strand through the pipe, you should choose a larger cross-section.

The bending radius is also an important feature. It specifies the minimum radius in which the hose can be bent. The smaller the diameter of the protective hose, the smaller the radius is normally, even if the material remains the same. 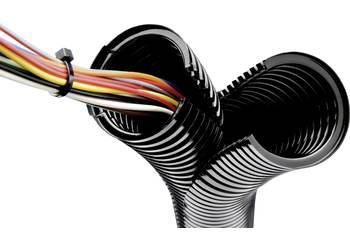 Figure: Cable protection hose is divided into two halves of the pipe for closing.

The hoses are often sold by the meter. The prices indicated therefore refer to the meter.

However, some are sold in fixed lengths. Therefore, you should pay attention to the length of the price. You can always find this directly in the product title.

The pipes are supplied without a specific connection to ensure their flexibility. Depending on the diameter, however, they can be used with different couplings. For which they are particularly suitable, please refer to the data sheet, which you can find at Conrad on the article page under Documents & Downloads.

In addition, you will find different hoses, which are certified according to DIN-EN for specific applications such as ship or tunnel construction, the railway or public buildings. In addition, Conrad has holders and other accessories that are designed for use with corrugated pipes.