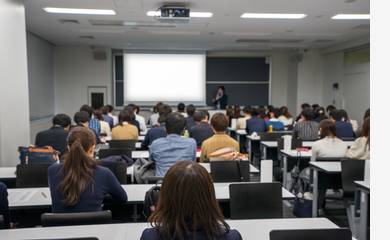 An impressive cinema experience usually consists of several factors. First of all, the film and its action are in the foreground. But was n't perceived as directly at the first moment, the soundis . But without powerful sound, the best scenes and the coolest action don't really come to their fore.

And just what was so successful in cinemas should be used in business life. If you 're watching impressive videos with company presentations or product introductions at trade shows or events, you need the right sound.

Tried-and-tested home theater systems are virtually predestined for this task. We will be happy to tell you what differences exist in the systems and what was to be observed during the selection and installation. And if required, we can also supply you with the appropriate popcorn maker for your next presentation with cinema sound.

What is a Home Cinema? 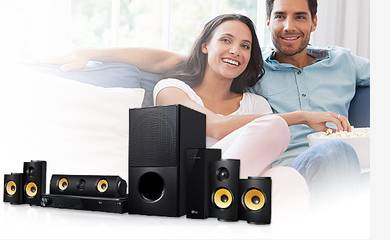 Filmmakers have long recognized that very good films with the right music and surprising sound effects are getting even better. It is not for nothing that so much effort is made for perfect sound in film production and in cinemas. However, since modern flat screens do not integrate powerful and well-sounding loudspeakers, sound systems or even home theater systems with external loudspeakers are required for the perfect sound design.

A home theater system contains several components that reproduce sound quality that is very close to the real cinema sound. But if you want to assemble your own home theater yourself from individual components, you usually have to take very deep into your pocket. Because the individual parts are relatively expensive in themselves. It is cheaper with a complete home-theater package, which contains all the loudspeakers, the subwoofer, Blu-ray player, AV-receiver, connection cable as well as a detailed design description.

What home theater systems are there?

In home theater systems, a distinction is made between 2.1 and 9.1 versions. The two digits always indicate the number of speakers and subwoofer. The subwoofer is responsible for the low tones and the loudspeakers provide the surround sound. In a 2.1 system, for example, there are two speakers and an active subwoofer. In a 9.1 system even nine loudspeakers plus subwoofer are integrated, so that you can experience a gigantic sound.

What has to be observed when installing a home theater sound system? 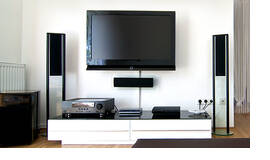 A good sound system shouldn't just sound good. The installation must also be carried out cleanly.

The installation effort depends of course on the size of the respective home theater system. Surround systems with five or more loudspeaker boxes are more complex to install than a 2.1 system. The installation of the front loudspeakers and the subwoofer is relatively straightforward, since these components are usually placed in the immediate vicinity of the TV set or AV receiver. So you only need relatively short cables, which can also be mounted in a concealed way.

The situation is different with the rear loudspeakers. Longer cables must be pulled and skillfully hidden here. It is therefore particularly convenient to buy a sound system with wireless rear speakers or wireless subwoofer. These can be connected to the home theater system via radio or W-LAN and are relatively easy to install. Even if you don't have so much experience setting up home theater systems yet.

Otherwise, the correct arrangement of TV, Blu-ray player, front, rear and center loudspeakers as well as subwoofer must be taken into account. In case of doubt, consult the operating instructions in which the installation of the supplied loudspeakers is normally explained in detail.

What has to be considered when purchasing a home cinema system?

In addition to the number of speaker boxes, there are other factors that you should consider when purchasing a home theater system. Pay attention to the functions of the loudspeakers, the connection possibilities and the music load capacity.

Speaker
Some home theater systems have wireless speakers. These are easier to install, especially with the rear speakers. In addition, you don't have to worry about hiding the annoying cable mess in an appealing way. Wireless speakers are usually connected to each other and to the TV via radio.

Interfaces (connectors)
Depending on the version, home cinema systems have a wide variety of interfaces and connections. The most important are optical digital inputs, HDMI connections, cinch sockets as well as USB, network and antenna connection options. When purchasing your home theater system, make sure that the system has the necessary input and output interfaces that you need to connect the existing devices.

What is the difference between a HiFi system and a home cinema?

A hi-fi system usually consists of a CD player, an amplifier and two speakers for the playback of the stereo signal. Home cinema systems are much more complex. Depending on the version, they have an AV receiver with Blu-ray player or DVD player and integrate up to nine or more loudspeaker boxes. In addition, a subwoofer is also included to play back the bass frequencies of any home theater system. The other loudspeakers play back the remaining frequencies and are perfectly tuned to each other in terms of sound technology. In addition, the speaker boxes are arranged around the user in a home theater system, so that the entire room field is filled with the sound and creates a cinema atmosphere. In a normal stereo system, the sound is only transmitted from one direction. In general, the sound quality is not comparable to that of a home theater system.

What is the difference between a home cinema system and a soundbar?
Due to their flat design, TV sets for loudspeakers only offer a limited installation depth. That's why the sound of the built-in speakers often leaves something to be desired. If you are afraid of installing a home theater system, you can choose a soundbar as an all-in-one solution. A soundbar is positioned below or in front of the TV to save space and is connected directly to the TV. The TV sound is now emitted via the soundbar, which significantly improves the sound quality. Even if high-end sound bars work partly with external subwoofers and can produce an artificial surround sound electronically, the sound quality of a soundbar does not come close to a 5.1 surround sound system.

What is the difference between Dolby Digital, Dolby Digital Plus, Dolby Atmos and Dolby True HD?
Ray Dolby invented the first active noise suppression techniques in the 1960er, and with Dolby Surround, the development of surround sound was significantly advanced.

Dolby Digital represents the transition from analogueue surround sound to digital surround sound and was introduced in cinemas in the 1990er. The digital playback method can support 5.1 systems and is the standard standard for DVDs.

Dolby Digital Plus was developed in 2005 for HD TV playback and streaming services and can theoretically support up to 13.1 systems. Dolby Digital Plus uses very low bandwidth due to its advanced data compression.

Dolby Atmos is the third dimension of sound and is preferred in cinemas. Through the use of high-level loudspeakers, even sound experiences are reproduced realistically from above. 5.1 systems with two additional height loudspeakers are required for playback. These systems are called 5.1.2 .

Dolby True HD is a digital multi-channel standard in which the audio data is transmitted without loss. It is used with Blu-ray discs, because thanks to intelligent storage procedures there is sufficient space on this medium.

What is the meaning of DTS-HD or DTS-HD master audio?
DTS stands for Digital Theater System. In the design HD or HD master audio it is a sound format for lossless transmission of audio data. This makes it comparable to Dolby True HD and is designed for 7.1 systems.

Conclusion: This way you can find the right home cinema system

First, decide whether you want to own a 2.1, 5.1, 7.1 or 9.1 entertainment system. Please note that real cinema feeling can only be achieved with at least five loudspeakers. The more speakers your home theater has, the more differentiated the sound experience. Also observe whether the loudspeakers can be integrated in a WLAN network or connected to the TV via radio. Those who choose to install wireless speaker boxes benefit from greater freedom of installation. You can install the rear boxes in many different places, without having to take care of annoying cables. smart TV and app-enabled home cinema systems are also practical. Here you can easily access the speakers from tablet, TV or smartphone and play music or videos.

Home cinema systems – more than just a relaxing cinema experience at home An impressive cinema experience usually consists of several factors. First of all, the film and its action are in the foreground. But was n't perceived as directly at the fi...