Back to Battery Chargers

Wireless charging of mobile devices was still a future music until a few years ago. However, induction technology has now brought us a long way closer to this possibility. Induction chargers do not allow smartphones and mobile phones to charge wirelessly, but without using a charging cable. You can find out how this works in our guide.

What is an induction charger and how does it work? 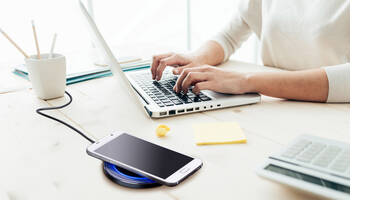 Conventional chargers for mobile phones and smartphones consist of small switched-mode power supplies, the output of which is usually provided by a USB type-A connection, which supplies the charging voltage for the mobile device. The mobile device is connected to the appropriate charging cable for charging.

Induction technology opened the way to charge a smartphone without connecting it to a cable. The charging process is "wireless". The method has been used for some time to charge electrical toothbrushes. Since an induction charger without openings is designed for charging plugs, it is well suited for use in damp rooms.

The chargers also called wireless chargers use the physical effect of magnetic induction to generate a voltage in the mobile device to be charged. For this purpose, the charger is equipped with a coil that emits a magnetic field with alternating voltage. The alternating voltage generates a switched-mode power supply, whose output voltage stimulates the coil of the charger via a driver or controller component. The working frequency at the charging coil is between approx. 100 to 200 kilohertz. Thus, small mechanical dimensions of the coils used are possible.

A compact receiver coil is installed in the mobile device to be charged, which works similar to the secondary winding of a transformer when approaching the inductive charging station. The voltage induced in it is fed via a voltage regulator to the accumulator of the mobile device, which is charged with it.

The term "wireless" is somewhat misleading in connection with this charging process, because wires are already in use, and not a few. Instead, "wireless" means no cable is required to connect the mobile device to the charger.

To standardize device configuration, the Wireless Power Consortium (WPC) has created a standard for such wireless chargers since 2008. The consortium currently comprises more than 600 companies from all over the world. The jointly developed standard is called "Qi", which stands for "life energy" in China. This Qi standard is being extended in such a way that the charging performance will be compatible in future also for laptops and similar large devices. Two other standards have not yet been widely adopted.

Advantages and disadvantages of wireless chargers 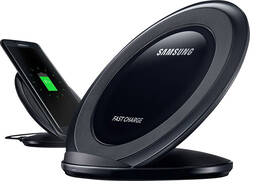 The disadvantage is that the mobile devices must remain in close contact with the charging station during charging, so that you may not be able to make calls during this time. Moreover, the energy transfer via induction has a worse efficiency than charging with cable: It takes longer to charge a mobile phone via induction charger than with a wired charger. If the wireless charger replaces a conventional charger, it remains virtually (as possible environmental load). In addition, switched-mode power supplies with the working frequency mentioned can interfere with radio reception on long wave, which should not be so much of a problem in practice.

Which smartphones is an inductive charger suitable for? 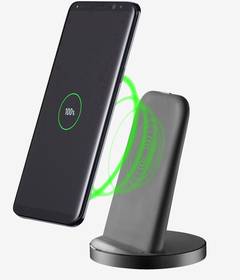 The prerequisite for charging a mobile phone wirelessly is that the induction technology is installed in the device in question. When you purchase a third-party wireless charger, you get a list of compatible devices. This is useful not only when you buy a charger but also a mobile device: For example, if you want to buy a new smartphone without having to replace the inductive charging station.

What does Qi certification mean?

Leading brands such as Apple, Samsung, Huawei, Xiaomi, Google, LG, Sony, Nokia and many other manufacturers have joined the WPC. Similar to WiFi, NFC or Bluetooth, a common standard can also be used for wireless charging.

The big advantage of Qi

With Qi, smartphone and charging cradle do not have to be from the same manufacturer.

All Qi-certified telephones and chargers are compatible with each other, regardless of manufacturer. This offers the great advantage that you can also charge your Qi-certified smartphone while traveling without the mains adapter and charging cable.

Especially as Qi-certified chargers are increasingly being used or offered for use in restaurants, public rooms or hotels. A charger that is forgotten at home is no longer a real problem.

Safety is the priority

Qi certification demands very high quality and safety. The tests are performed by independant test laboratories using validated measuring instruments. This is the only way to ensure that the charging process is reliable and safe.

Essential features include reliable external object detection (FOD) and effective voltage limitation in the mobile device. Another Qi specification describes the magnetic shielding of the battery to minimize the heating during charging.

The combination of induction charging components that do not match one another can quickly lead to massive problems. Defective batteries or irreparable smartphones are the inevitable consequence. If the detection of foreign objects does not work properly on the charging station, metal objects in the immediate vicinity can become so hot that they can cause painful burns if touched. This is why all induction chargers offered directly by Conrad Electronic SE are Qi-certified.

Our practical tip: Disconnect the charging cradle from the mains

A switched-mode power supply on the low-voltage power supply also draws current when no charging process takes place. For this reason, you should disconnect the induction charging tray from the mains supply for the sake of the environment when it is not in use. This also applies to cable-bound chargers.

What should be observed when purchasing an induction charger?

An induction charger should have a non-slip contact surface for the smartphone. We recommend a rubberized or similarly coated surface, possibly in combination with holding clamps or magnets. It is important that the smartphone or mobile phone cannot slip in the charging cradle, but is tilt-proof in all directions.

Wireless chargers, which have an LED display, offer the advantage that the charging status can be read at any time. You can also see at a glance whether you have placed the mobile device correctly on the inductive charging station.

Compatible third-party induction chargers tend to charge faster and more reliably because they have multiple coils, unlike the charging stations of many mobile phone providers. This proves to be more practical even in everyday life: One of the coils usually "catches" the smartphone, which is why it does not have to be placed too exactly on the charging station.

Since one is not bound to plug sizes or standards during charging, induction chargers offer a lot of design freedom and flexibility. Devices with induction charging function can be integrated, for example, in furniture, lamp feet or car fittings. First models are already available for (almost) invisible installation.

About induction chargers Wireless charging of mobile devices was still a future music until a few years ago. However, induction technology has now brought us a long way closer to this possibility. Induction chargers do not allow smartphones and mobi...