With the Internet radio the radio listening is possible in the Internet, so that several thousand stations can be received. Even though it is often not different from the normal radio, it still has many advantages to offer, which can be clearly seen. Access to the Internet is provided by a DSL connection, which usually works via WLAN.

What is Internet radio?

An Internet radio is a radio that allows you to listen to radio stations via the Internet, was it the result that almost countless radio stations could be received.

Simple to use and low in demand, it is possible to connect the Internet radio quickly. In addition to listening to Internet channels, most versions can now also listen to stations via the FM/FM connection.

With the help of an Internet radio, up to 30,000 stations can be received worldwide, depending on the model!

Internet radios with rechargeable batteries can be used anywhere.

How does an Internet radio work?

The individual Internet radios make their stations available online, was not only working within Germany, but also from all over the world and didn't play a role in reception. The Internet radio, which is connected to the Internet via the DSL connection via LAN cable or WLAN, can now call up and play all information from the transmitter online.

What types of devices are there?

There are also differences in the individual Internet radios. In addition to the normal Internet radio, there are also models with the designation DAB+. These are radios that offer better reception and provide more stable performance via WLAN. In addition, the sound quality is much better than with the typical and normal models. Furthermore, DAB+ Internet radios often offer users many other great functions, including the display of the artist or the display of the song title. Some models are also able to display the album cover or hide advertising. Even in the connection type there are differences with the Internet radio, so some models can only be connected via LAN cable, others again exclusively via WLAN and again others with both variants. In addition, some products offer the possibility to carry out all settings as well as station searches via an accompanying remote control, which considerably increases the user comfort.

What is to be observed when purchasing an Internet radio? 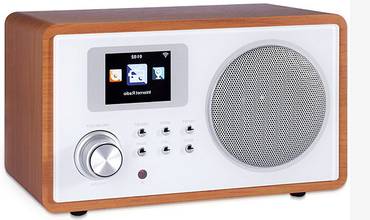 Meanwhile, there are numerous Internet radios from different brands of manufacturers with many different features, so it is not always easy to get a clear overview. In order not to be disappointed at the end of the day, a few factors should be taken into account when purchasing a new Internet radio.

In order to enjoy the music to the full, it is important to pay attention to the loudspeakers of the models when purchasing and thus not to let the sound quality be ignored. While devices with only one speaker can only play music in stereo quality, versions with two speakers offer a much better quality. The connection of one or more other speakers is also not a problem with some radios.

For radio reception, there are some mandatory standards regarding encryption. Basic protection, also known as WEP, is usually present on every radio, but is often not sufficient. The most secure method is to secure the network using WPA encryption.

If you want high-quality sound quality and a secure Internet connection, you should use DAB+ Internet radios. These also bring many other great functions, which can be clearly seen.

While the normal radios have a dial to search for the individual stations, this function does not exist in the Internet radio. For this reason, the display should also play an important role in the purchase. In order to make operation particularly easy and to get a quick overview, it is advisable to select a device with the largest possible display.

How does Internet radio connect to the Internet?

The Internet radio can be connected to the DSL router via WLAN or LAN cable and thus gets access to the Internet.

Can several Internet radios run simultaneously via the router?

Yes, this is possible because each Internet radio connects separately and has its own access. However, it is important to ensure that an input is free when connecting via LAN cables, was not necessary when connecting to WLAN.

Can Internet radio only be used to receive Internet stations?

This depends on which model you own, because some Internet radios also enable the reception of the normal radio stations, which of course does not require an Internet connection.

It is important to know exactly where the Internet radio will be used in the future and what features it should bring before purchasing. The connection type, whether via LAN cable or via WLAN also plays an important role and the sound quality should not be forgotten. Other functions, on the other hand, are a matter of taste, but increase the user comfort.

About Internet radios With the Internet radio the radio listening is possible in the Internet, so that several thousand stations can be received. Even though it is often not different from the normal radio, it still has many advantages to offer, whi...