Back to Rechargeables (Non-standard)

Modern mobile devices such as smartphones, tablets, notebooks, digital cameras or even wireless power tools must be compact, handy and light. In addition, the devices must have long running times in the battery mode. These are requirements that can only be realized with the latest lithium battery technology.

What is a lithium-ion battery?Lithium ion rechargeable battery 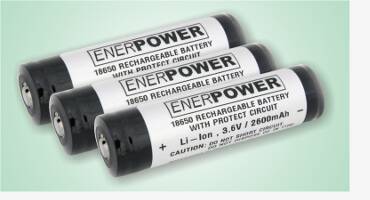 The great advantage of a lithium-ion battery is its high energy density. Or in other words: There is a lot of power in a small battery!

Lithium-ion batteries are compact and powerful.

How is a lithium-ion battery constructed?

Like any other battery or conventional battery, the lithium-ion battery consists of a positive electrode (cathode), a negative electrode (anode) and an electrolyte that serves as a transport medium for the lithium ions. 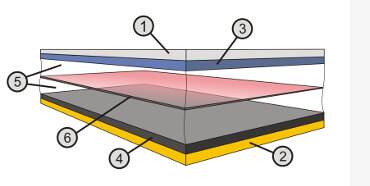 Schematic setup of a Li-ion battery:

The current is fed to the electrodes via electrically conductive layers of different materials.

The cathode (+ pole) consists of a lithium metal oxide (3), which can contain different proportions of nickel, cobalt or manganese. Alternatively, lithium iron phosphate is also used as cathode material.

The anode (- pole) consists of carbon (4) or rather graphite, which is structured in layers. However, nanocrystalline, amorphous silicon, lithium titanate or tin dioxide are used instead of graphite.

The type and composition of the electrodes determine the voltage and electrical properties of the battery. But the basic principle is that the more uniform and pure the chemical composition, the higher the performance and the service life of the cell.

To enable the lithium ions to move back and her as charge carriers in the cell, there is a water-free electrolyte (5) between the electrons, which serves as a transport medium. Various salts are used, such as lithium hexafluorophosphate or lithium tetrafluorborate, which are dissolved in aprotic solvents such as ethylene or propylene carbonate. In order for the charging and discharging processes to run undisturbed, the electrolyte must be extremely clean.

To avoid a short circuit between the electrodes, the electrodes are separated by a separator (6). The separator consists of a microporous polyolefin membrane that is permeable only to the tiny lithium ions.

How does a lithium-ion battery work? 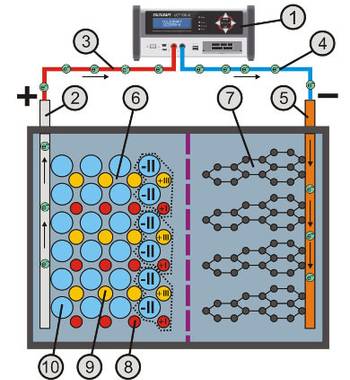 The function is to be explained on the basis of a common lithium cobalt dioxide battery.

During charging, a voltage source or a charger (1) is connected to the electrodes.

Due to the charging voltage, electrons move from the cathode (+pole) of the battery (2) via the charging cable (3) to the positive connection of the charger.

Similarly, electrons move from the negative terminal of the charger via the charging cable (4) to the anode (-pole) of the battery (5).

This would charge the lithium metal oxide layer (6) positively and the graphite layer (7) negatively.

If you look at the oxitation figures of the lithium metal oxide layer, the following figure is shown:

The lithium cobalt dioxide (LiCoO2) is uncharged in this state. 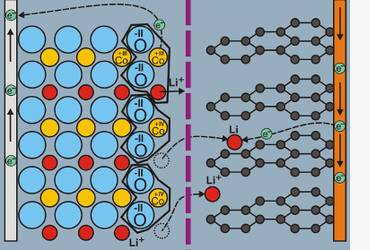 The charger provides for an electron migration.

The free Li-ion migrate from the cathode through the separator to the anode.

The charging process subtracts electrons from the cathode, which further oxidizes the cobalt to the level IV of oxidation.

The oxide would then be positively charged in itself. To counteract this, the lithium ions leave the oxide, which then makes it uncharged.

The now free lithium ions move through the electrolyte and the separator to the anode (-pole) of the battery.

There they enter an intercalation connection (Latin intercalare = insert) under the admission of free electrons with the layer-like structure of the graphite.

When all lithium ions have arrived on the anode side and are embedded, the battery is fully charged. 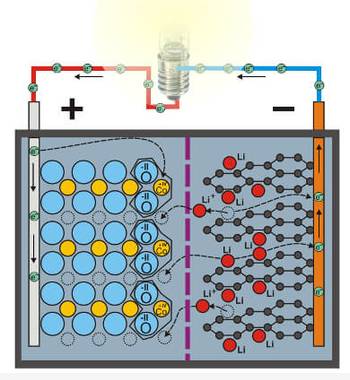 During unloading, the intercalation connections at the anode (-pole) are disconnected.

The lithium releases the electrons and becomes a positively charged lithium ion.

Since lithium as an unnoble metal emits its electrons extremely easily, this process is almost automatic. All you have to do is connect the electrodes of the battery to an external circuit, including consumers.

The electrons emitted by the lithium are directed via the external circuit from the anode (- pole) via the consumer to the cathode (+ pole). There they reduce the cobalt from the level IV of oxitation back to level III.

And that's exactly what happens. After the electron has been delivered, the lithium ions move from the anode through the electrolyte and the separator back to the cathode. There they connect again to LiCoO2.

The free Li-ion migrate from the anode back to the cathode.

How is a lithium-ion battery properly charged? 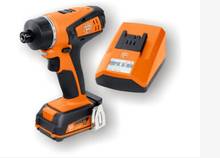 However beautiful the high energy density of lithium-ion batteries is, the energy donors have a decisive disadvantage: They are extremely sensitive to overcharging and deep discharge.

In both cases, the lithium batteries will be irreparably destroyed.

This is not an issue with permanently installed rechargeable batteries in smartphones, tablets, notebooks or even with battery tools. This is because the respective devices use an appropriate electronics, which charges the battery according to regulations and reliably protects it against deep discharge.

To ensure this, the chargers belonging to the respective device must always be used. 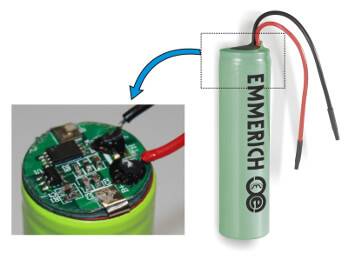 For individual cells for individual use, these external device protective devices are missing. This is why some manufacturers are equipping their batteries with intelligent protective circuits that effectively protect the battery in the event of incorrect treatment.

It is important to work with the correct charging voltage. Depending on the substances used for the electrodes, lithium batteries have different nominal voltages:

Accordingly, the charge-end voltages are also different. In case of doubt, a look at the technical data sheets of the rechargeable battery will help.

The protective circuit is installed directly in the battery cell. 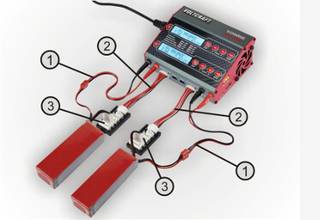 There are no protective devices for lithium batteries, which are used e.g. as drive batteries in the model construction area.

Here, the user has to make sure that the rechargeable battery is charged correctly. If the cells of a battery pack are connected in series, it must also be ensured that all batteries have the same voltage.

That's why model chargers are equipped with so-called balancers.  During the charging process, the balancer always discharges the cells with the highest voltage via a load resistance short-term, so that all cells of the battery pack have the same voltage up to 1/100 Volt.

When the current has reached a minimum value (t3), the battery is fully charged.

How many charge cycles does a lithium battery achieve?

The number of usable charge/discharge cycles can be several hundred cycles. The number of cycles the battery ultimately creates in reality depends on many factors:

Type and quality of the battery

The purer and the higher the quality of the substances used, the more powerful and durable the battery is.

Temperature and charging status during storage

An ideal charging state of 40 – 60 % when stored cool. Storing a fully charged battery in a warm environment drastically reduces its service life.

A battery that is only 50% discharged and recharged will create significantly more cycles than a 100% discharge. It is also advantageous not to fully charge the battery or to recharge it immediately with a minimum capacity removal.

High charging and even higher discharge currents are required in the model construction area. The associated mechanical and thermal loads of the cell also have a very negative effect on the number of cycles.

These numbers are used to describe the types of lithium batteries. In the case of the 18650, this means that the Li-ion battery has a diameter of 18 mm and is 65 mm long. The zero at the end describes the round design of the lithium-ion accumulator.

However, there are differences within the 18650er series.

With some Li-ion batteries, the positive pole is flush with the housing and with others it is protruding or protruding. Alternatively, there are 18650er cells with open cable ends that can be soldered to PCBs or fitted with suitable connectors.

What is a lithium polymer battery?

With a lithium polymer battery or LiPo battery, the otherwise liquid electrolyte is contained in a solid to gel-like film on a polymer basis.

This enables the construction of flat cells, whereby a LiPo can also have other designs.

LiPo batteries do not have a fixed housing or metal jacket and therefore have a very low weight. This is also the reason why LiPo batteries are very popular with model flyers.

However, LiPos is also extremely sensitive to mechanical damage. Similarly, these batteries cannot withstand temperatures below 0 °C and above 60 °C.

Summary with advantages and disadvantages

The lithium-ion technology offers many advantages, but also has to contend with not insignificant disadvantages, as the following overview shows:

When properly handled, lithium batteries are a safe and powerful source of power, and their advantages far outweigh the disadvantages. This is also why lithium batteries are very popular with device manufacturers. However, it is important to be aware of any risks involved in the day-to-day handling of these power stores.