Back to SAT Systems (Complete)

What was a satellite system? 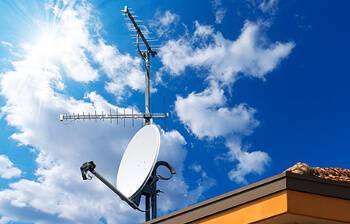 As the name implies, a SATELLITE system receives digital radio and television signals in HD quality from a satellite from space.

The television satellites are located above the equator in space and orbit the Earth once a day at a speed of 11,070 km/h. The flight altitude of approx. 35,800 km is chosen in such a way that the centrifugal flight force of the circular flight path and the earth attraction cancel each other.

This trajectory is also known as geostationary trajectory, because the satellites are observed from Earth and appear to be firmly anchored in the sky.

Since not only a TV satellite orbits the earth, the satellites are arranged like pearls on a string on the geostationary track.

Satellites on the geostationary track

Viewed from the ground, the geostationary track is quite densely populated with satellites. But due to the large distance to the earth, there is still plenty of space between the individual satellite systems. 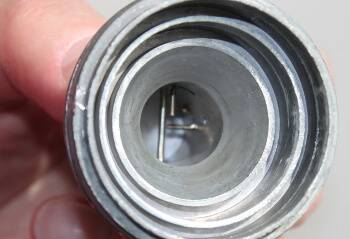 The two short wire pins are the actual SATELLITE antennas.

Since the television satellites transmit with a frequency of 10.7 to 12.75 GHz (10.7 to 12.75 billion oscillations per second), the required reception antennas are only a few millimeters long. In order to receive both reception levels, one antenna wire pin is horizontal and the other is vertical.

These small wire pins are housed in a low-noise converter (LNB for low noise block converter).

In this LNB, the transmitter signals are amplified and converted into the frequency range from 950 to 2,150 MHz. These frequencies can then be easily transmitted via coaxial cable. That LNBs can do even more, however.

In our guide we have compiled everything you need to know about LNBs for you. 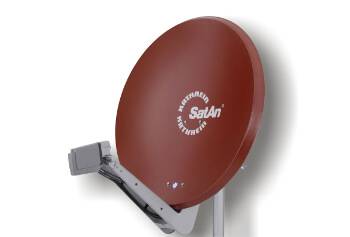 Reflecting and bundling is the task of THE SATELLITE dish.

A reflector is used so that a sufficiently strong signal is available at the short antenna pin in the LNB.

Like a burning glass, the reflector captures the transmitter signals and bundles them at the input (feed) of the LNB.

In general terms, THE SATELLITE reflector is often referred to as A SATELLITE antenna, was technically not quite correct.

The actual antennas are hidden in the LNB.

The receiver controls the LNB and switches the programs.

After the transmitter signals have been converted from the LNB to a "cable-compatible" frequency, they can be forwarded to THE SATELLITE receiver.

THE SATELLITE receiver can be either a stand-alone device or directly integrated in a TV.

The essential tasks of THE SATELLITE receiver include supplying and controlling the LNB/multi-switch, switching the program and providing picture and sound for the television. 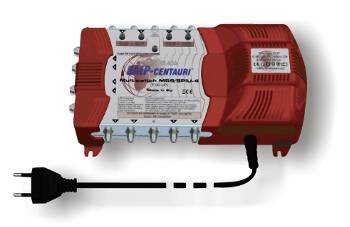 A multi-switch distributes THE SATELLITE signals to the respective subscribers.

WITH SATELLITE systems with several subscribers, multi-switches are used. A multi-switch has four SATELLITE inputs to which a Quattro LNB is normally connected. Thus, the horizontal and vertical polarized transmitters are available on the input side in the lower frequency range of 10.7 – 11.75 GHz (low band) and in the upper frequency range of 11.8 – 12.75 GHz (high band).

The multi-switch recognizes the voltage or the control signal, which is fed to it at each output and connects the output with the corresponding input.

SO that the user does not have to search for the individual components themselves and pay attention to their compatibility, so-called SATELLITE systems are offered. The great advantage of this is that the components contained in the set fit perfectly both mechanically and electrically.

What different SATELLITE systems are available?

SAT systems are available in a wide variety of versions and with a wide range of features. We want to take a closer look at some of the key points:

Size and shape of the reflector mirror

The most obvious difference in SATELLITE systems is the size and shape of the reflector. A small camping satellite system comes with a mirror only 35 cm in size. As a result, these systems offer virtually no "bad weather reserves" when the signal is attenuated by thick rain or snow drops. In multi-subscriber systems, reflectors with a diameter of 80 cm are often used. Thanks to the higher signal strength, longer antenna lines can also be used between LNB and receiver. Alternatively, there are also flat antennas, which do not stand out as a balcony chair and do not need any drill holes for a wall bracket.

The requirements for A SATELLITE system vary greatly. While a user needs a complete set with mirror, LNB and receiver, another already existing receiver wants to continue to use. That's why the manufacturers offer different set combinations.
However, since it is often not clear whether the antenna is to be mounted on an existing antenna mast or on the wall, a special wall mounting is usually not included in the delivery. This must be purchased separately, as must the antenna cable.

Where can A SATELLITE system be mounted?

Whether it is on the balcony, in the garden, on the wall of the house or on the roof, reception does not matter. However, the different installation sites have their advantages and disadvantages:

Good accessibility in case of service or when snow is in the reflector.

Poor accessibility in case of service or when snow is in the reflector.

The final installation site is ultimately based on where there is a clear view of the satellite and where the reflector least disturbs. In addition, the cables must not be unnecessarily long.

How is A SATELLITE system set up correctly?

In order to clarify whether the installation site is suitable, you have to know which satellite you want to receive. 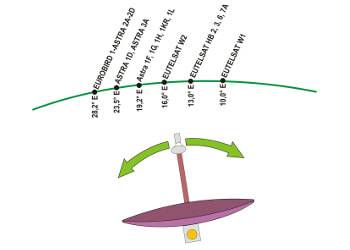 The horizontal alignment according to the length of the mounting location.

The exact position of the satellites is indicated by an angle of how far west (W) or east (E) they are from the zero meridian. The Nullmeridian is a semicircular line that runs from the North Pole to the South Pole via London's Greenwich Observatory.

If, for example, a° SATELLITE antenna is° to receive the ASTRA SATELLITE system at 19.2 E in the Munich area (approx. 12 east of the zero meridian), the antenna must first be aligned to the south.

This is necessary because the satellites are positioned on the geostationary track above the equator. The exact alignment is then 7.2° "left" from the south (19.2° E – 12° E = 7.2° E) when standing behind the mirror.

The further north, the steeper the antenna is.

How steep A SATELLITE antenna must be (elevation) also depends on the location of the receiving satellite. In principle, the further south the site of construction is, the steeper the mirror must be pointed upwards.

Many brackets on THE SATELLITE antennas have a scale where the elevation can be pre-set before mounting at the installation site. The scales are not very accurate, but can be used as a rough stop.

Free view of the satellite

SAT systems must not be protected by obstacles.

Often YOU can see SATELLITE antennas at unusual mounting locations, such as under roof projections, under balconies or behind bushes. One wonders right: Does this still work properly or is the antenna partially shaded by the roof, the balcony or the plants?

In case of doubt, tables can help or you can use A SATELLITE protractor

whether THE SATELLITE system is mounted on the wall, on the balcony, on the roof or in the garden does not matter at all. At least if the antenna has "clear view" to the satellite. But was the stability of the bracket important. The best SATELLITE antenna will not produce a usable image on a fluctuating antenna mast or a shaky wall bracket in the long run. Since the reflector mirrors are not an insignificant wind load, the bracket must be correctly stable and the screws must be tightened firmly.

How is A SATELLITE system connected correctly? 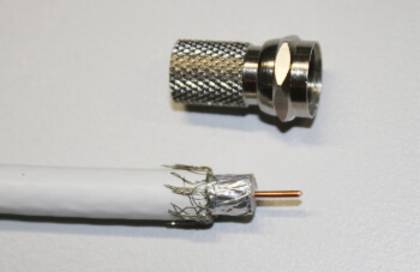 No wires of the shield must be in contact with the center conductor.

The connection of A SATELLITE system is quite simple, since only coaxial cables have to be mounted between the individual components.

However, when mounting the F-plugs, make sure that the wires of the shielding braid (minus connection) do not have any contact with the center conductor (plus connection) of the cable.

If an existing cabling is used, you have to pay attention to hidden distributors, filters or antenna sockets. Some of them have built-in capacitors that interrupt the DC power supply of the LNB.

If only one subscriber is connected to THE SATELLITE antenna, all this is quite simple: An antenna, a single LNB, a receiver and a coaxial connection cable to the television (TV) – the HDTV reception system is ready. The biggest challenge in this case is the holes for laying cables.

If two subscribers are to be connected, a system with twin LNB is used.

With a Quad LNB up to four subscribers can be connected directly to the LNB.

For even more participants, the use of a Quattro LNB and a multi-switch makes sense. 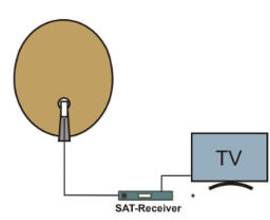 The installation is very straightforward for a subscriber.

How is A SATELLITE system set correctly?

Of course, you can align A SATELLITE antenna with the TV picture. To do this, the receiver is switched on to a pre-programd program slot. Then turn the ready-to-use antenna to the right and left or up and down until the image of the TV channel appears. The holder is fixed in this position so that the reflector holds stable but can still be twisted.

Then turn the antenna sideways to the left and to the right until the image disappears again. At these two places you mark the holder. Then the antenna is set so that it is exactly between the two markings.

With elevation, i.e. with the inclination of the antennas upwards and downwards, one can proceed according to the same scheme.

More precisely, however, it is possible to use A SATELLITE finder, which shows exactly the signal strength of the received signal. Simple SAT-Finder are switched in the antenna line between LNB and receiver and indicate the signal maximum.

High-quality SATELLITE finder has a built-in rechargeable battery and can also be connected to the LNB without a receiver. In addition to the signal strength and the signal quality, they also show the currently received satellites. Because these devices are significantly more expensive, they are primarily suitable for people who use them every day. 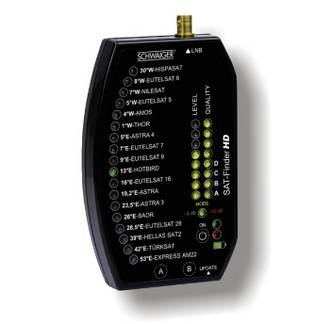 High-quality SATELLITE finder shows the signal strength and the satellite.

no matter whether you set the antenna according to TV picture or with a measuring device: For adjustment, always hold the antenna by the holder only. If you touch the antenna to rotate the mirror, the reflective surface will be warping and misadjustment will occur.

The most frequently asked questions about SATELLITE systems

How big does the satellite dish have to be?

In order to answer this question in concrete terms, you have to look at the satellite's illumination zones on the Internet. It shows how large the satellite dish must be in the respective area. However, if several subscribers are to be connected to a system via A SATELLITE distributor or multi-switch, it is better to select a number larger than the satellite antenna. Especially when long SATELLITE cables are connected.

DVB-S stands for "Digital Video Broadcasting-Satellite" and means Digital Satellite TV. Where the DVB-S2 standard is the successor standard of DVB-S. After switching off the analogueue TV programs, only digital SATELLITE systems have been used since April 30, 2012.

What was HD or HDTV?

What was the distinguishing feature of a camping SATELLITE system?

Camping SATELLITE systems are designed for mobile use. As a result, THE SATELLITE dishes of the mobile SATELLITE systems are rather small and equipped with a high-quality digital single LNB. A camping satellite system can be easily transported and set up even easier. The receiver usually has an operating voltage of 12 V, which was made possible by a connection at the cigarette lighter of the vehicle. Usually, a suitable SATELLITE cable with mounted F-plug is also included in the delivery.