What was the tilt switch or float switch? 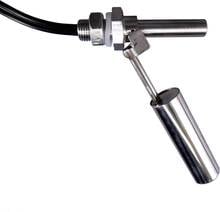 In order for the level to be controlled by the level of the liquid in containers and to be maintained at a certain level, there must be a possibility to trigger a switching or control function for a valve or a pump or an electronics, depending on the level. For this purpose, there are tilt switches and float switches. Depending on the version, such switching devices, which are operated depending on the level of a liquid, are suitable for level control and control in applications in the chemical, process engineering, food technology, domestic technology or similar. Such switching devices are also used to implement safety functions against overflowing or empty running of containers.

How do tilt switches and float switches work and how are they structured?

The tilt and float switches use the lift of a float in a liquid whose mechanical force is used to actuate a switch. This force can act directly on the switching mechanism or indirectly, for example, on a reed contact via a magnet. There are versions with NO contacts and those with NC contacts.

For the tilt switch or tilt sensor, the float is located on or in an arm or tube attached to the side of the module, whose angle of inclination depends on the level of the liquid to be measured. There is a magnet in the moving arm and a reed contact in the fixed part opposite, which closes when the magnet approaches.

As the name implies, float switches have a hollow body filled with air, the float, which moves up and down on a rising pipe depending on the level of the liquid. Here too, when a certain position is reached, a switch contact is actuated that closes or interrupts the circuit. 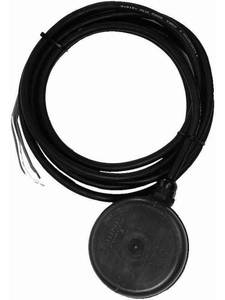 Another variant is immersion switches, which are used as inclination sensors in connection with submersible pumps. This is a hermetically sealed housing, which is held by lift at the surface of the liquid. The cable attached to the pump holds the switch so that it points up or down depending on the level. A metal ball can move freely in the housing. If the switch points upwards, i.e. when the container is filled, the ball is placed on a mechanically actuated switching contact that switches the pump on. After the pump has lowered the level, the dip switch moves to a different position so that the ball is no longer on the switch. The pump switches off. The level at which the pump switches on or off is determined by the variable length of the connection cable.

The positions for switching on and off differ with these switches, so that a hysteresis arises between them, which leads to more or less large level fluctuations in the container.

Because parts of these controls come into contact with liquids, a safe separation between the electrical contact and the tilt arm or float mechanism must be ensured. This is achieved by installing the switching elements in hermetically sealed housing parts. Here, the use of permanent magnets for operating the reed switches, which do not require an electrical connection to the outside, is proven.

The values of the permissible electrical switching capacity of the contacts are also specified in the data sheets. The maximum switching currents and switching voltages must not be exceeded during operation. When switching inductive loads such as relays, contactors and motors, ensure that the voltage peaks do not burn the contacts.

Interference-free operation of tilt and float switches depends on the viscosity of the fluid, which is usually temperature dependant. If it becomes too thick, the float can no longer move properly or even stick together.

Because the buoyancy of the float bodies is caused by the gravity acting vertically, the correct installation position plays an important role in the proper functioning of a tilt and float switch. The corresponding information in the data sheets must be observed so that lift bodies cannot tilt but can move freely.

The cable glands to the electrical switches are not located in the area below the liquid level except for dip switches. However, gland bushings with gland bushings must be used because they could be wet or damp in the surrounding area.

Tilt switches and float switches are suitable for applications in conjunction with a wide range of liquids, which may include not only "harmless" substances such as water, but also aggressive media such as oils, alkalis and acids. In addition, they can be liquids that require special hygiene and cleanliness requirements. Examples are applications in the beverage, food and pharmaceutical industries. Here the material of the switching devices plays an important role, because it must be suitable for the respective application and the application area.

What types of tilt and float switches are available and what was to be observed during selection and operation?

The requirements of the respective application determine the practical design of the respective tilt and float switch. In particular, the material that comes into contact with the media must be suitable for the respective use. Polypropylene (PP), for example, is resistant to aqueous solutions of salts, strong acids, alkalis and washing hoses up to 1200, stainless steel is suitable for food and pharmaceutical products, for example. For other aggressive substances such as oils, fuels, organic solvents, etc., special plastics must be selected whose properties are specified in the respective data sheets.